The month of April is bookended by two full Moons. We begin on the flush of the Libra Moon March 31st and end with a Scorpio Full Moon April 29th. Full Moons bring lots of emotion and release so be sure to get an opportunity to clear stress out your life as much as possible. The simpler things are, the less overload there’ll be.

April is all Mars, all the way. Mars is the energy of action and growth. He’s the God of War in the Roman Pantheon, Ares in the Greek. It’s the part of you that’s feisty, that won’t be stood on, that stands up for itself and fights for what it wants. It’s no coincidence that the big topic facing our nation is the use of military-style automatic weapons in civilian life.

Mars rules the sign of Aries and there’s a lot of Aries energy about these days. The Sun is in Aries until the 19th and Mercury is retrograde in Aries until April 15th and will stay in Aries until mid-May. Uranus is in Aries also too before it makes a monumental shift into Taurus (for the first time in 84 years!) this summer.

As the month opens, and for the next 12 days, Mars in capable Capricorn forms an angle of tension with the Sun and Mercury. This tense energy feels dangerous, but it does allow you to get off your you-know-what and get something done, whether Mercury is retrograde or not.

Mars travels with Saturn at the beginning of the month encouraging you to pace yourself, and to be practical. It may feel a bit of a Sisyphean task, rolling that ball uphill, but it will eventually reach the top so keep at it!

The mood lightens on April 4th when Mars pulls away from Saturn and things ease up a bit. Gracious Venus is in her home sign of Taurus forming a harmonious relationship with Mars and Saturn. This feels grounding, despite the tension, and helps you invest your time and attention to the things that mean the most.

Also, on April 4th, Mercury and Saturn face off in a tense square bringing instant karma to words spoken in haste or unconsciousness. Biting your tongue might be hard to do under the philosophical Sagittarian Moon but you could try.

Despite the karma, there’s love in the air over the weekend (from Good Friday through to Monday 9th). Mars and Venus make kissy noises to each other from the earth sign of Capricorn to the earth sign of Taurus. It’s a good time for love and making decisions about money though late Saturday and early Sunday may feel a little tense as the Moon squares the Sun. There’s also a Moon/Pluto conjunction on Sunday the 8th and both square Uranus. Don’t let your fears get the best of you! Use these tense times to move your body and/or to push through on projects.

The next few days are easeful under the waning Aquarian Moon but on the 11th deep secrets could be revealed, and volcanic things occur as the Sun squares powerful Pluto. Use this time to clear the air or spring clean vigorously. Out damn spot!

The Aries New Moon on the 15th is a burst of much needed vitality, especially since Mercury turns direct now too! Hallelujah!

Friends, this New Moon is crazy. Uranus, planet of change and surprises is conjunct the Sun and Moon meaning that all bets are off. Anything can happen. If you’re looking for an outside chance, the rare possibility that opens doors for you, this is the New Moon for you. Plant those seeds and get out of the way. Things are going to sprout fast – you’ll see results soon.

April 17th the Taurus Moon conjuncts Venus and opposes Jupiter bringing big expenses. It’s a recipe for unexpected home repairs. Remember – moderation in all things. Don’t overdo, especially as the Sun and Uranus are still together.

Saturn turns retrograde on the 17th also, taking your attention inside. It’s time for reflection and inner work as well as completing unfinished projects. Saturn will be retrograde until early September 2018.

The 18th fairly crackles with energy at the annual Sun/Uranus conjunction. Things could get a little wild and wooly out there. Be careful but do try something different.

Late on the 19th the Sun, worn out from Uranian high-jinx no doubt, breathes a sigh of relief and enters stable Taurus. Happy birthday Taurus! This is one of my favorite times of year and is a significant shift in the energy. The focus is on growing things and slowing down. The next few days feel mellow and grounded.

Mars approaches powerful Pluto as Pluto retrogrades on April 22nd. Transformation becomes an inside job until Pluto turns direct at the beginning of October this year.

On the 24th lovely Venus zooms into chatty Gemini and feels an urge to leave town. Might be time to plan a trip!

Heads up my friends! Stormy cosmic weather ahead! Mercury squares Saturn on the 25th bringing everyone back to earth with a thud. It’s another day to watch what you say. Mars meets Pluto the same day. Ohh… this is dark and brooding energy. Stay away from dangerous places and people, nuclear reactors and weapons of war for the next two days. It is a good time for moving heavy energy just protect yourself first.

The Moon is waxing and comes to fullness in Scorpio on the 29th. It’s time to purge yourself and your home of unwanted toxic thoughts and things. Mars and Pluto are still together but less volatile than before. Keep a low profile.

The month ends on a high feeling. The Moon is still very fat and connects with abundant Jupiter. Feelings run full and things could be blown out of proportion. Beltane is the next day on May 1st and spirits will lighten. In the meantime, know what it is that you treasure and take your cues from the earth.

Remember, you matter, we are all connected, Earth is our home and love is our destination. 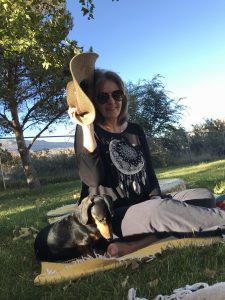