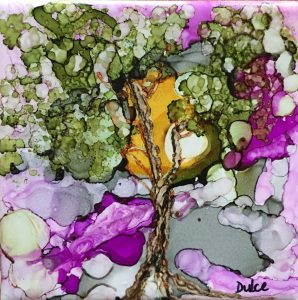 I write to you from a dimly lit, old house. The tall golden oak doorframes are both graceful and majestic. Antiques twinkle dully from the doily-covered walnut dresser. Light shines through the ancient stained glass. I move quietly here. There’s no internet, no television. It’s a shrine to an old lady, an angel they say, who died over 30 years ago. It’s as if she could walk in at any minute and find her things just as she left them. I’ve been graciously allowed to live here while I renovate a house; a house built the same year I was born and one that was cruelly used by renters and neglected by the landlord.

It’s a fitting project for this time in my life, during this Mercury retrograde. Soon the house will be refreshed and livable; Mercury and Pluto will turn direct, and all that has been waiting in the wings will move forward. Venus is in a new cycle as an evening “star” and travels with the Sun at twilight.

October is a transitional month. It holds open a cosmic door in between retrogrades and provides an eclipse activating an old cycle. Let’s see what this month holds for us.

October begins slowly, but only just. Deep, systemic change is upon us. Saturn squares Uranus. It’s hard to maintain the status quo when these two resonate with tense vibration. Where in your life are you trying to break through to something bolder? What are you desperately trying to keep the same?

Mercury is still retrograde, back in Virgo, preparing to turn direct. There’s no end to speculation regarding finances as Venus and the Sun are in Libra and opposite abundant Jupiter. Aesthetics predominate. Make something beautiful.

Mercury turns direct early on the 2nd and things flow again. Practical matters need attention as the Moon and Pluto connect in Capricorn. As I’ve mentioned before, my late husband used to say that the greatest expense in life is failure to pay attention. Pay attention to your life and health, my friends!

The next few days continue pragmatically. Take care of business.

The 6th through the 7th, the Libra Sun opposes tender Chiron. Relationships need healing. Connect with people whose vibration lifts you up. Make your unique contribution.

October 8th, and the Moon moves through Aries, connecting with Chiron as it grows fat. Take care of yourself and those you love. This is a healing time.

The Aries Full Moon on October 9th holds a lot of energy and is deeply sensitive. It brings all our differences to the surface at the Saturn/Uranus square. Mercury, returning to the last degrees of analytical Virgo, opposes Jupiter. There are a lot of opinions out there! The Moon conjuncts Chiron and Venus opposes Chiron. That’s a lot of pain. It’s a lot of healing too. There are many factors you’re unable to control at this Full Moon. Other people have their agendas. Stay organized and practice gratitude; lots of it.

Here’s a poem that reminds me of these times. It’s by our cherished poet Wendy Videlock, and it first appeared in Rattle Magazine,:

On The Practice of Opine

we’d all be saints.

That cracks me up! It’s so true.

Surprises are possible on the 11th as the Moon conjuncts Uranus and forms an awkward angle. Your values may not be other peoples. Perhaps this is the moment when you refine your values to better suit your growth.

The next few days bring rapid change as the Moon travels through Gemini and meets Mars.

The 15th through the 17th the emotional Cancer Moon helps you access your true feelings.

The 18th through the 19th the Leo Moon brings steady confidence. Yet on the 19th Mercury opposes Chiron requiring a delicate hand and thoughtful responses.

Meanwhile, Venus continues to travel with the Sun and becomes conjunct on the 20th. Financial matters are a hot topic. Relationships are magnified, some may disappear completely while others are reborn.

The 20th through the 23rd, the Virgo Moon is a grounding rod. Get back to basics and take care of details, including your health.

Energy shift on the 23rd as Venus precedes the Sun into Scorpio. Depth becomes important as does deliberation. Slow and steady is the best speed. Mars is getting ready to stop and turn backwards. Mars is the ancient ruler of Scorpio. It seems the cosmos is pointing us inward.

The 24th is your opportunity to prepare for the coming Scorpio New Moon solar eclipse. Get centered. Saturn turns direct and begins to pull out of its tense relations with Uranus. You can begin to build now.

October 25th is a 2* Scorpio New Moon solar eclipse which includes Venus also at 2*. Three celestial bodies (Sun, Moon and Venus) form an angle of adjustment with Jupiter, poised to return to Pisces. Something is afoot my friends! Some deep rearranging at our combined root. Tap into your deepest desires and hold fast to the light. Consider your life 18 years ago (around 2004) when this same point was eclipsed. Is there anything there that is similar to this period?

On the 27th, Jupiter re-enters Pisces inviting a return to your most precious spiritual truths. Jupiter will stay in Pisces until winter solstice. At that time it will return to Aries, bringing us back to the beginning point we keep traversing.

Until the 27th, the growing Scorpio Moon carries intent. From there to the 29th the Sagittarius Moon brings hope. It resonates with strengthening Saturn and opposes active Mars. Consider your plans. Reflect on your path.

Mercury enters Scorpio on the 29th. The energy has tipped toward our fears and phobias, toward our passions. Be willing to enter the so-called darkness of your own shadows. Prepare to liberate them in the light of awareness.

The month ends as Mars slows and stations. The inner journey is now accompanied by a warrior. Be bold, friends! Slow downs are possible. Pace yourself.

November brings a Full Moon eclipse and changes. Stay tuned to your inner wisdom. Keep pumping love and gratitude into the matrix. We’re lucky to be here.

And remember, you matter; we’re all connected, Earth is our home and love is our destination.

Here’s a fabulous resource for you. Do yourself a favor and buy one asap.